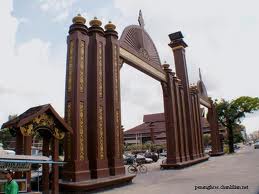 Kota Bharu is a city in Malaysia, the state capital and Royal City of Kelantan. It is also the name of the territory (jajahan) in which Kota Bharu City is situated. The name means ‘new city’ or ‘new castle/fort’ in Malay.

Kota Bharu is situated in the northeastern part of Peninsular Malaysia, and lies near the mouth of the Kelantan River at 6°8′N 102°15′E..

Kota Bharu is at a rank of 10th in the list of the largest cities in Malaysia with a population of some 600,000. Kota Bharu’s population is 70% Muslim,with the remainder consisting of Buddhists and Christians. The Indigenous peoples which reside in the outskirts are generally practising Christians. The local Chinese community which are mainly urban practise mainly Buddhism. The local state government is represented by the Pan-Malaysian Islamic Party.

This northeastern Malaysian city is close to the Thai border, and is home to many mosques. Also of interest are various museums and the unique architecture of the old royal palace (still occupied by the sultan and sultanah and off-limits to visitors but viewable from outside) and former royal buildings (which can be visited) in the centre of town.

The Kelantanese culture is a smorgasbord of Malay and Thai influences due to its geographical proximity with Thailand. The Chinese here are much more assimilated with local culture compared with other parts of Malaysia. Much of the food are spicy with rice as the primary staple as the local diet.

This site uses Akismet to reduce spam. Learn how your comment data is processed.