The City of Shinshiro has received national recognition in Japan for its international relations commitment and programmes with the award of the 13th Annual International Exchange Commendation of the Minister for Internal Affairs and Communications. The International Exchange Commendation, sponsored by the Ministry of Internal Affairs and Communications and the Council of Local Authorities for International Relations (CLAIR), awards original and creative regional internationalisation initiatives between sister cities. Shinshiro was commended for 20 years of its active involvement with the Newcastles of the World Alliance. The award ceremony was held recently in Tokyo. 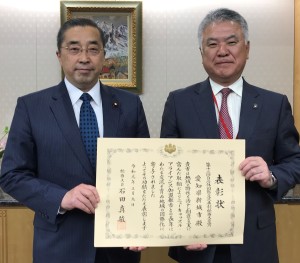 In honour of this commendation, a panel exhibition reflecting on the 20 years of the efforts and achievements of the Newcastle Alliance is being held at four venues in the city from June 10 to August 18. 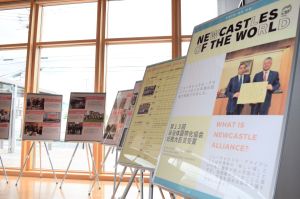 The Award Review Board commented, “The idea of creating an international alliance based on the name of a municipality is not only unique, but to have the alliance expand to 17 cities in 15 countries, to include a division for youth, and to have a business fair is extremely multifaceted. Not only have administrative bodies have been part of the planning process, but residents and organizations have taken an active part, allowing us to feel its even greater expansion.”

Shinshiro Mayor Ryoji Hozumi said: “The City of Shinshiro would like to thank all the member cities, the Executive Committee of Shinshiro, sponsors, organisations, and the citizens of all of our Newcastles who supported the Alliance over the years. Together with all the members of the Newcastles of the World Alliance, the City of Shinshiro would like to continue to foster and strengthen international exchange activities in the areas of culture, tourism, education and business.”

This site uses Akismet to reduce spam. Learn how your comment data is processed.